"Traffic transition" means, among other things, fundamentally rethinking the distribution of public space. Especially in cities, public space has become a scarce resource that can be used in different ways. What possibilities and ideas would open up if public space were to be redistributed? What do residents and users want from their urban environment? How would people redesign their immediate public environment if they had the opportunity to do so? These and similar questions were investigated by the DLR Institute for Transport Research as part of the scientific monitoring of the temporary Barbarossa summer street in Berlin-Schöneberg.

In August 2021, part of Barbarossastraße in Berlin-Schöneberg became completely car-free. In practice, this means that there was no motorised traffic in the area between Goltzstraße and Kyffhäuser Straße during this period and that the street could thus be used for walking, cycling, playing and just hanging out. The Kiezerfahren project (funded by the BMU) developed a concept in advance for the redesign of the area which was implemented during this time and which provided for a total of 10 “Schöne Flächen” ["Beautiful Spots"] in the street space. These were parklets made of wooden constructions that invited people to engage in different activities. There were opportunities to exchange and give away clothes, to lie in a hammock, to work, to garden, etc.

Changes in the use of public space, searching for a parking space and traffic noise were the main effects

The following section describes the effects of the redesign from the respondents' point of view. For a total of 18 effects, respondents are asked whether the situation has improved, worsened or remained unchanged as a result of the Barbarossa summer street. The three effects that were subjectively considered to be the most important could be ticked off. The respondents rated the use of public space (ITEM 1), followed by the search for a parking space (ITEM 2) and traffic noise (ITEM 3) as the most important effects. With regard to the search for a parking space, the situation has clearly worsened in the opinion of the respondents, while traffic noise and the use of public space have improved.

Overall, the respondents rate the situation around car traffic as a challenge. In their view, finding a parking space, conditions for car traffic and traffic in adjacent streets have worsened.

An improvement was assumed for factors that improve the amenity value: According to the respondents, the Barbarossa summer street has had a positive influence on air quality, traffic safety, quality of stay, use of public space, neighbourly contacts, pedestrian traffic, the situation for families and children and, to a lesser extent, on the situation of older people.

The situation for people with limited mobility is assessed as rather unclear or negative. Only 10 persons of the respondents stated that they themselves have a mobility restriction. However, they also see a worsening of their situation due to the summer road. 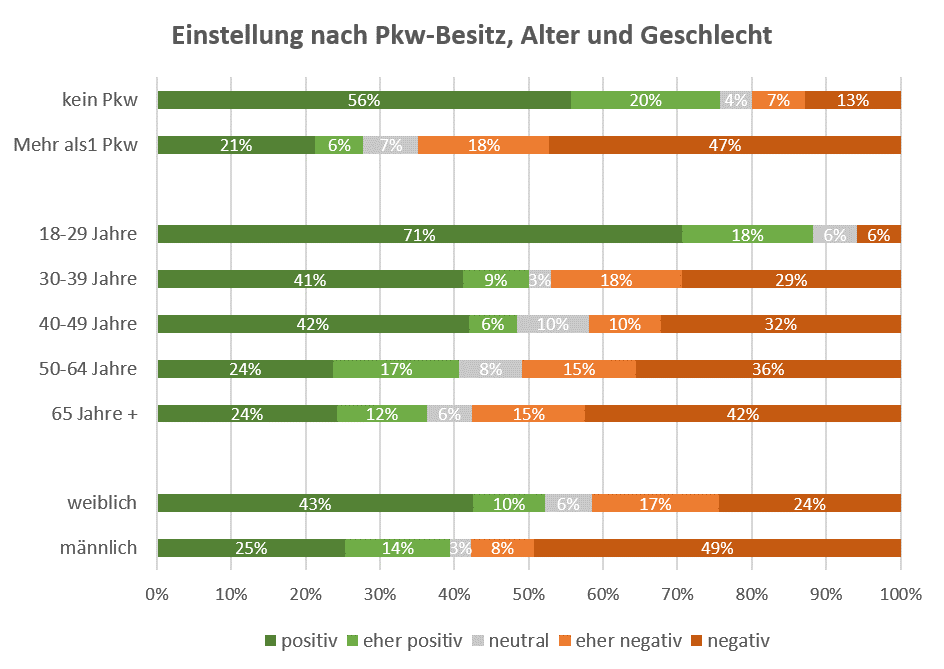 Further results on the car-free Barbarossa summer street in Berlin-Schöneberg and the background to the survey can be found on the DLR website.