In most Central European cities the public space and especially the space for active transport is increasingly contested. Due to car-friendly urban planning after the Second World War, there is less public space allocated for active transport modes. Moreover, four recent trends further intensified the space scarcity for pedestrians and cyclists in many European cities. First, the constant rise of tourism[1] is causing additional traffic, especially within the city centres. Second, the trend of (re)-urbanisation continues leading to increases in the densities of urban areas[2] Third, the renaissance of the bicycle as a daily means of transport[3] has led to demand for additional space for cyclists. Lastly, the number of micro-mobility vehicles has increased drastically since the last few years, putting further pressure on the space[4]. All these trends affect the usage of transport space within the public realm, and specifically for the space for active modes of mobility. The growing pressure on space for active modes reduces their attractiveness, especially for the most vulnerable parts of the society such as children, the elderly and people with mobility impairments.

This effect runs contrary to the goals of most city administrations to increase the attractiveness and share of active mobility in order to tackle challenges like air pollution, noise pollution and climate relevant emissions. This leads to the question – how to deal with the growing scarcity of street space for active mobility?

The Dutch capital experienced this growing pressure on urban space at a higher intensity and also earlier compared to other cities due to a growth in cycling, tourism, micro-mobility devices and the trend of re-urbanisation.

While many European cities have just started measures to improve the situation for cyclists recently, Amsterdam started to fix the errors of the car-friendly urban planning of the post-war era since the 1970s. Accordingly the modal share of cycling reached the lowest point within the century during the mid 70s[5]. Amsterdam has improved its cycling infrastructure constantly since then and is today the second most bicycle friendly city in the world[6] 48% of all “home to work” trips are done on bicycles.[7]  However, the renaissance of cycling as a means of transport poses a conflict for cyclists and pedestrians.  The cycle paths became more congested due to the increased number of cyclists leading to demand for more space for cycling, at the expense of space for pedestrians and parking.

As tourists are attractive customers for shared mobility devices, Amsterdam was flooded with shared scooter and bicycle fleets from various providers. Their vehicles were often blocking public spaces, annoying many Amsterdam residents.[9]

How to deal with the space scarcity for active mobility?

How did Amsterdam react when the cycle paths and the sidewalks became more and more contested due to the rise in cycling, more tourists, densification and an increasing number of micro-mobility devices? What can other cities learn from Amsterdam?

a) More dedicated space for pedestrians and limitations for cyclists

The city of Amsterdam decided to introduce restrictions for cyclists. Pedestrian zones exclude cyclists and an increasing number of squares have been declared free of even bike parking. Prominent announcements make very clear that bikes that violate the realm of the pedestrian will be towed away. At the same time the city has continuous dialogue with the users. For instance parking guides speak with cyclists in order to generate ideas for efficient parking which does not disturb other users and pedestrians. In order to keep the sidewalks free from bikes, the city is offering many new bicycle parking facilities. Pictograms on the sidewalk show cyclists and scooter users that parking is forbidden and at the same time provide information regarding alternatives for bicycle parking. In order to map the quality of the pedestrian infrastructure and identify bottlenecks, the city is developing a walkability index. The index compares the effective walking space (which is derived from the residual sidewalk width, the bicycle parking pressure and other obstacles) with the pedestrian demand to derive the walkability score. Especially tourists enjoy a stroll along the canals in the heart of the city, not always respecting the peace and quiet of the neighbourhoods. Announcements working with arty pictograms on the sidewalk smartly remind the pedestrians to respect the silence. 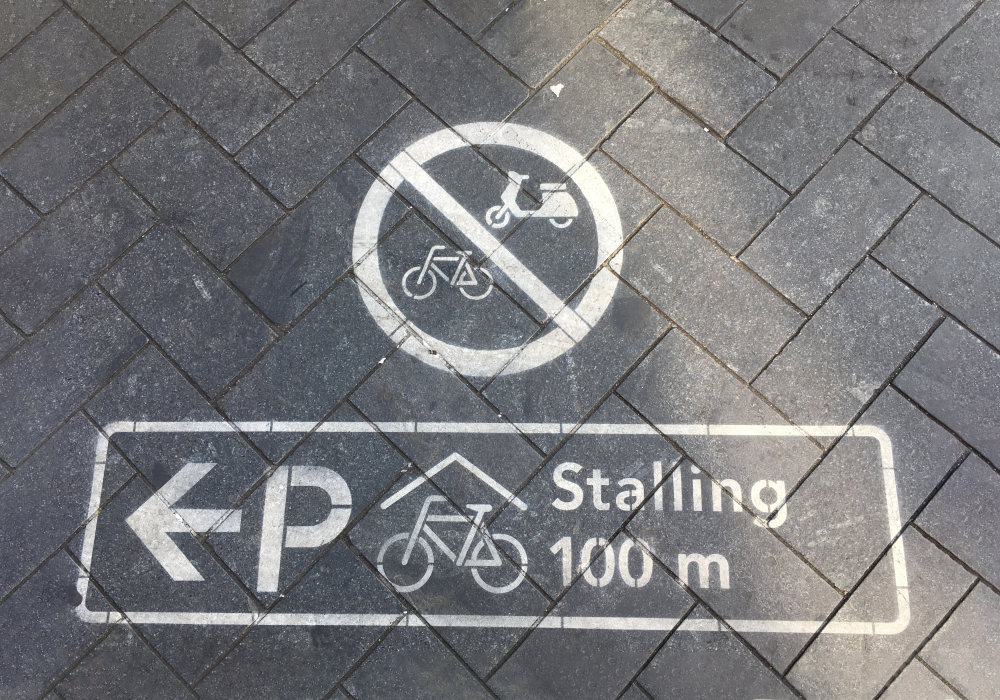 b) More space for cycling infrastructure

One may argue that Amsterdam has become a victim of its success. The well-developed bicycle infrastructure is very inviting to the users and has sometimes led to overcrowded cycle paths. To satisfy the ever growing demand, the city is developing new infrastructure to make cycling as convenient as possible for all groups of the society. One important component is the development of a network of bicycle streets – the fietsstraats. The bicycle street, once developed by the city Münster, was copied by the Dutch in the early nineties. In recent years Amsterdam has converted many streets previously ruled by cars to bicycle streets. The fietsstraats usually are paved with red asphalt or red brick stones. Further, signs point out that cars are only guests in these streets. 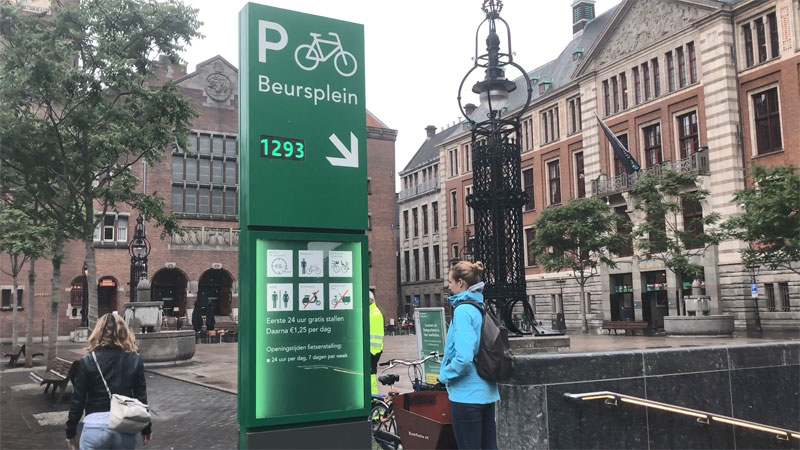 Another important component of the new cycling infrastructure are new secured parking opportunities. At some places, old ships on the canals are used as parking places for bikes, at others underground garages for bikes have been developed. Also dedicated parking facilities for cargobikes have been built. Smart signages, painted on the street asphalt, guide users to the next secure parking opportunity within walking distance. One of the latest bicycle parking facilities is the underground garage below the Beursplein, a central square, which was used formerly as a car parking lot. Today there are neither bikes nor cars on the square, but 1,700 parking spots for bicycles below the square. Beyond, Amsterdam is developing a network of bicycle highways, to connect the inner city with the outskirts of Amsterdam.

The city administration reacted to the complaints of residents about blocking vehicles on sidewalks and public spaces and in 2017 dockless and app based bike sharing[9] was forbidden. Currently only the OV-fiets which are provided by the National train company Nederlandse Spoorwegen can be used as shared bicycles. Kick scooters never entered the Dutch capital as by national law, kick scooters are not allowed in the Netherlands.[14]

Even in a city like Amsterdam, where most of the trips are done by bicycle, car infrastructure is still taking a vast amount of space. About 60% of the traffic infrastructure (20% for moving cars, 40% for parked cars) in Amsterdam’s city centre is devoted to cars, the balance being left for other modes (25% pedestrians, 11% cyclists, 4% tramways).[15] In order to provide more space for cycling and pedestrians, the city of Amsterdam has decided to reallocate the space from the most space consuming mode of transport – the car. Many politicians are afraid to use anti car slogans for their election campaigns. Still, during the last election campaign, the opposition party GroenLinks, which is now the leading party in Amsterdam, promised to considerably reduce the number of parking spots within central Amsterdam. The new coalition decided to remove the number of parking spots by 1,500 per year, in total by 11,500, which is about 10% of all parking spots in the city centre. The city smartly clears away about 1,100 parking spots every year, by not reallocating parking licenses that have been freed from people moving away from Amsterdam. Additionally, the city is increasing the cost of a parking permit to 500€ a year. Besides using this freed space for wider sidewalks and cycle paths, the city jointly discusses with the residents how to use this available space to make streets more attractive. Often the locals wish to have more green spaces, more playgrounds or even space for their compost heaps.  The city is also trying to improve the quality of life by planting additional trees and building playgrounds. A video produced by streetfilms shows how inhabitants and the local government have changed the layout of the streets in favour of the residents: https://www.youtube.com/watch?v=gqqVTNg6tC4.

The Amsterdam case shows how space scarcity can be tackled by city administrations.